Engineers and Designers of the 90s

Engineers and Designers of the 90s

We have a lot to be thankful for, and I imagine technology is sited on the king’s throne. There is a lot we cannot relate to, we only hear stories of how it was and fringe. Knowing what we know now, how would we have survived in our grandpa’s era?

After being used to Autocorrect and Microsoft Word capitalizing every first letter of the sentence or pointing out any misspelled errors, one can only sympathize with people who used typewriters. Mostly having to rewrite a whole document if they missed a word, accuracy was needed, and a lot of patience. We complain about slow internet and how it tests your patients, but now imagine, the grace needed by early engineers and architects to accurately draw and design without the assistance of CAD. That is not work one can do without being extremely passionate. 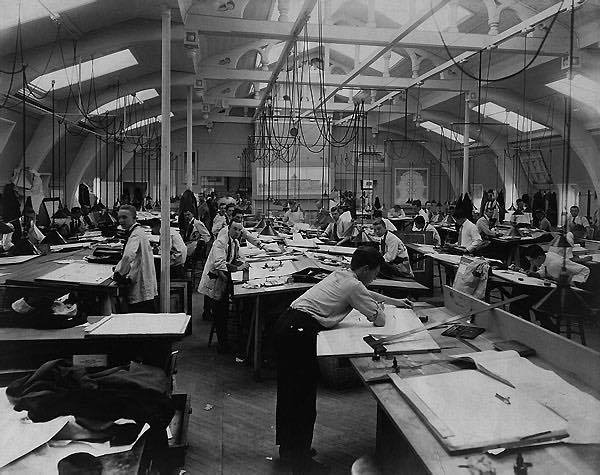 Especially for aircraft and ship engineers, lofting must have come with a lot of backpain. Lofting, according to Wikipedia, came about when ship designs evolved from craft to science. Lofting means transferring Lines Plan to a Full-Sized Plan. Drawing these full-sized patterns was often done in large, lightly constructed mezzanines or lofts above the factory floor. These drawings were then used to create 3-D solids from paper, cardboard, wood, plastic and sheet metal. These solids were than assembled to create a full-sized model/mockup of the project. The Mockup was valuable in determining that all the systems and equipment would fit in the given space.

Fast forward to the 21st century, Lofting in CAD software is a function used to join cross sections into smooth 3D shapes. The 757 was the last Boeing commercial airplane that required a full scale engineering mock-up.

Objects cannot be manipulated or separated on paper drawings. Thus, it goes without saying that there is no pan and zoom on paper drawings, panning or zooming back then meant redrawing different times to show different zoom levels.

Calculators were still not in existent back then, beside using human computers, calculations were done via slide rules. There was no cheat sheet, one had to fully utilize their brain as there was no CAD to tell you the margin of failure, it was trial and error.

The workforce was just as large, hardwork was not even a question. Offices were filled with hundreds of draftsmen, designers and engineers. The drawings were checked and rechecked for errors. Projects consisted of thousands of drawings; tracking documentation in case of any changes was a nightmare.

It was labor intensive, tedious and time-consuming. Change is inevitable, and there was immense need for it, necessity was definitely the mother of inventions like AutoCAD, which has now led to more modern inventions like DemosCAD, a demonstration software for AutoCAD. The same work done then, can now be achieved by a few people sited on their computers at a very short time and more accurately.

More in this category: « Why Designers Should Enter the Yearly Skyscraper Competition With DemosCAD Software, The Sky is Your Limit »